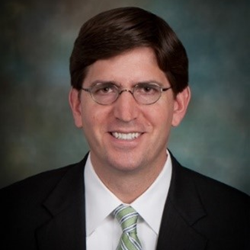 Stephen Nuckolls is the chief executive officer of Coastal Carolina Health Care, PA, and their ACO, Coastal Carolina Quality Care, Inc. His responsibilities include the direct management of the 60 provider multi-specialty physician-owned medical practice and its ACO. They currently participate in the MSSP’s Enhanced Track and have value-based contracts with Medicare advantage as well as commercial plans. The group has a large primary care base and their operations include an Ambulatory Surgery Center (GI Endoscopy), Sleep Lab, Urgent Care, and Imaging Center and 13 other practice locations. Mr. Nuckolls facilitated the formation of the group in 1997 and has served in his current role since that time. Prior to the formation of this organization, Mr. Nuckolls helped guide physicians and integrated hospital organizations in the formation of larger systems.

Mr. Nuckolls earned his BA in Economics from Davidson College and his MAC from UNC’s Kenan-Flagler Business School. He is a founding member of the National Association of ACOs and served as their board chair from 2016-2017 and currently serves as Treasurer. Prior to 2016 he served as Treasurer and Chair of their Policy Committee. In addition to these responsibilities, he has served on several advisory boards and committees for the North Carolina Medical Society and is a frequent speaker on ACOs and related topics at medical conferences including presentations for the Medical Group Management Association, the American College of Physicians, and the National Association of ACOs.