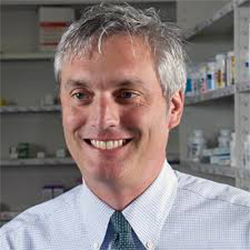 An internationally recognized trailblazer in the area of innovation in healthcare delivery focused on community pharmacy, Joe Moose is a clinical pharmacist, the Director of Strategy & Luminary Development with CPESN USA, and co-owner of Moose Pharmacy and its six locations across North Carolina. Joe received his Doctor of Pharmacy from Campbell University. He serves as a primary preceptor with the University of North Carolina Eshelman School of Pharmacy Residency Program.

Joe also serves as the Lead Community Pharmacy Coordinator for Community Care of North Carolina. In this role, he has built a network of over 200 high-quality community pharmacies that strive to offer enhanced value to payers. Under his leadership, Moose Pharmacy has also partnered with the City of Charlotte and Union County, NC to oversee employees enrolled in disease management programs.

Joe once found a baby while duck hunting in North Dakota and it has led to his life-long passion for helping to care for others. Joe enjoys spending time on the ocean and “hanging out” with his sons, Spears and Walt.